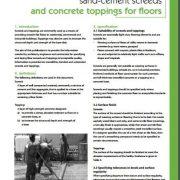 Permissible deviation from datum level depends on the area of the floor and its intended use. For large areas for normal purposes ±15 mm from datum should be satisfactory. Greater accuracy may be required in small rooms, along the line of

partition walls, in the vicinity of door openings and where specialized equipment is to be installed directly on the floor and in the case of high tolerance industrial floors.

This is described as the maximum permissible deviation from a straight line 3 m long joining two points on the surface. See Figure 2. Values of deviation with corresponding class of surface regularity are given in Table 1. The class of local surface regularity of a finish should be selected from those given in Table 1 according to the use of the floor. In making this selection, account should be taken of the type and thickness of the surface or flooring to be applied and the standard of surface regularity required of the finished floor. The highest standard (Class 1) should be used where a thin flooring is to be applied and where the minimum irregularity is required of the finished floor, e.g. for a television studio. In cases where a very flat floor finish is required, Class 1 using the straight-edge method, may not be adequate and other methods may have to be used (see Further Reading number 6). Conversely, the lowest type of wearing surface is applied where the regularity of the finished floor is not a significant factor. Insistence on higher standards of surface regularity than are necessary will result in higher costs. In service, the suitability of a floor in terms of surface regularity is governed by its radius of curvature and changes in height over short distances. Specialist test equipment is now available with which to access these factors and new specifications can be used to control them (see Further Reading number 6). Although this new test equipment is more complex to use than the straightedge, it is less laborious on large floor areas. 3 m Surface of floor/ screed/ topping

The designer should specify the maximum permitted abrupt change in level across joints in direct finished slabs and screeds and toppings taking into account the type and thickness of the flooring to be applied. For some types of floorings, a maximum of 2 mm would be acceptable, taking into account the surface preparation necessary to receive the flooring. For other types of flooring, especially thin floorings, or where no flooring is to be applied, it would be appropriate not to have any changes in level across joints. Readings should be taken as soon as possible after completion of the screed or topping. Various methods of specifying surface flatness and levelness are discussed in Further Reading number 7. Screeds The strength of a hardened sand-cement screed can be tested with the “BRE screed tester”. Specifying an acceptance criterion before the start of the job is advisable as this could prevent disputes after completion. The “BRE screed tester” consists essentially of a mass which is dropped on a standard foot piece which is placed on the surface of the screed. See Figure 3. The indentation resulting from four impacts of the mass is measured and is an index of screed strength. Acceptance limits for various strength categories are given in Table 2. 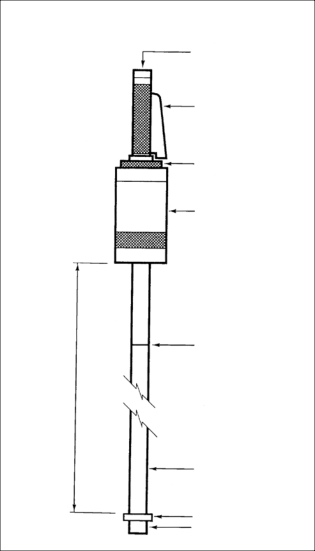